From Academic to Mindful

Here’s a story about when I flew around the world to Vermont and joined a “modern monastery”.

Before getting on the plane from Germany to Vermont, USA, I had spent my time studying for a PhD, doing highbrow and needlessly heady stuff. Ironically, while being in the field of “Decision Science”, I’d had a terrible time with the most important decisions in my own life. Most of my scholarly colleagues were of the overthinking type. While many of them were great at what they did and honorable in what they strived for, they often seemed to come at life from a limited perspective. I didn’t fit into the model of academia.

In the meditation retreats and other circles I had explored in the years before, some people seemed to go through life very differently. They lived in a way that I could not explain. The best word I could put to it was “richer”, and I felt like I was missing out. Deeper and more fundamental questions popped up, which I thought I had answered years ago. Looking at friends, I had become aware of how one truly becomes the average of the 7 people one spends most time with. Deciding where to work and what job to do became ever more daunting. Consistently the perception lurked “I am not in the place where I need to be right now. Where I am, I cannot learn the things I need to learn for the rest of my life. Time is running out.”

Only after coming to The Monastic Academy did I realize that what I was experiencing was hardly uncommon. In Pali it is called “Samvega”, a sense of urgency that is growing even though we don’t know why we have it. I had come to understand how valuable time was, and that I needed to commit to something worthwhile. At the same time, something within me said that I was not in a position to do that. For that reason, plans that looked appealing one day looked useless the next. My mindfulness practice had exposed many of the illusions most of us hold about how to live life, but I was at loss to find role models and an alternative.

Saṃvega: A Pali Buddhist term which indicates a sense of shock, anxiety and spiritual urgency to reach liberation and escape the suffering of Samsara. Also, really confusing. 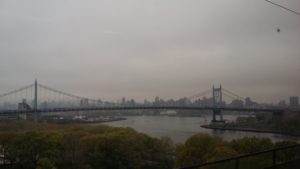 Leaving NYC by train for the Monastic Academy. How did I get here…

So I was off to the Center for Mindful Learning’s Monastic Academy. After a period of nerve-wracking uncertainty, I was following my gut for the first time. To me, CML seemed like an opportunity for serious training in meditation and character building in a way that works in the modern world. I had followed the place since it had been set up a few years ago and their posts would periodically pop up in my social media feed. Each time, I was antsy that such a place existed for the rest of the day: why wasn’t I there?!? As I took the hour-long night drive from the train station to CML’s mountainside headquarters and retreat center, I was unsure; had I been projecting my fantasy onto this place?

In some ways the X-Men academy that I had imagined just does not exist. But in the important ways I hadn’t been dreaming: this place is for real. Diving into the Monastic Academy residency felt like a duck taking to water. Being at an intensive mindfulness training community was constant practice. Literally everything was an opportunity for growth on deeply significant skills. Chanting was a time to let go of inhibitions, to trust one’s own strength, to find ways to do what was needed right then. Computer work was an opportunity for struggling to maintain mindfulness while doing menial tasks, which I had always dreaded. It was very inspiring to see how people who had done this training for longer had blossomed like flowers; they were strong, kind and responsible, and able to gather energy from somewhere inexplicable. It’s hard to imagine this blossoming happening so deeply anywhere else, even with a strong mindfulness practice. Our normal tendency of avoiding physical pain and mental confusion is just too strong to overcome, without a glimpse of a role model, someone who demonstrates why we walk this path. Seeing people as living examples of what is possible helped to transform sitting in meditation through the monthly silent retreats from a battle into a hopeful journey. 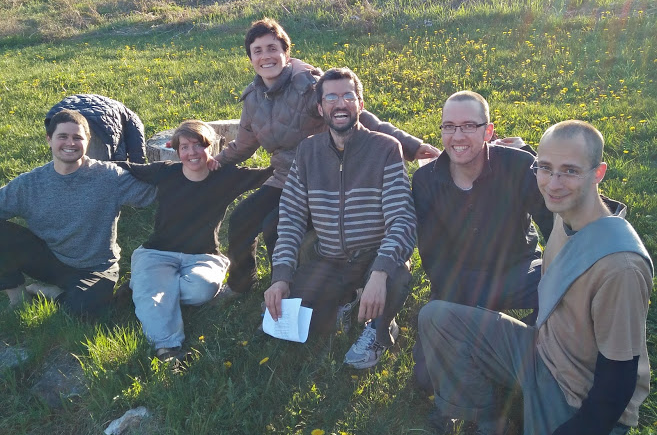 Residents, blossoming together after a retreat. Glare may or may not be sunshine.

A big part of that journey was screwing up. Conventional wisdom in the academic world has it that mistakes will break one’s neck and are to be avoided at all costs. That may or may not be an appropriate mindset in some situations, however it is definitely stifling. Probably the furthest away you can get from academia would be when I had to build a laundry line structure, because…  “go do it!”. While everyone was pushing me to get the job done, it still felt healthy. Screwing up felt safe at Monastic Academy and was even encouraged. It was a constant challenge to face tasks I didn’t feel prepared to do to do, such as facing a class full of eight year olds to teach them about mindfulness, or fixing a clogged drain pipe. This was a major lesson. 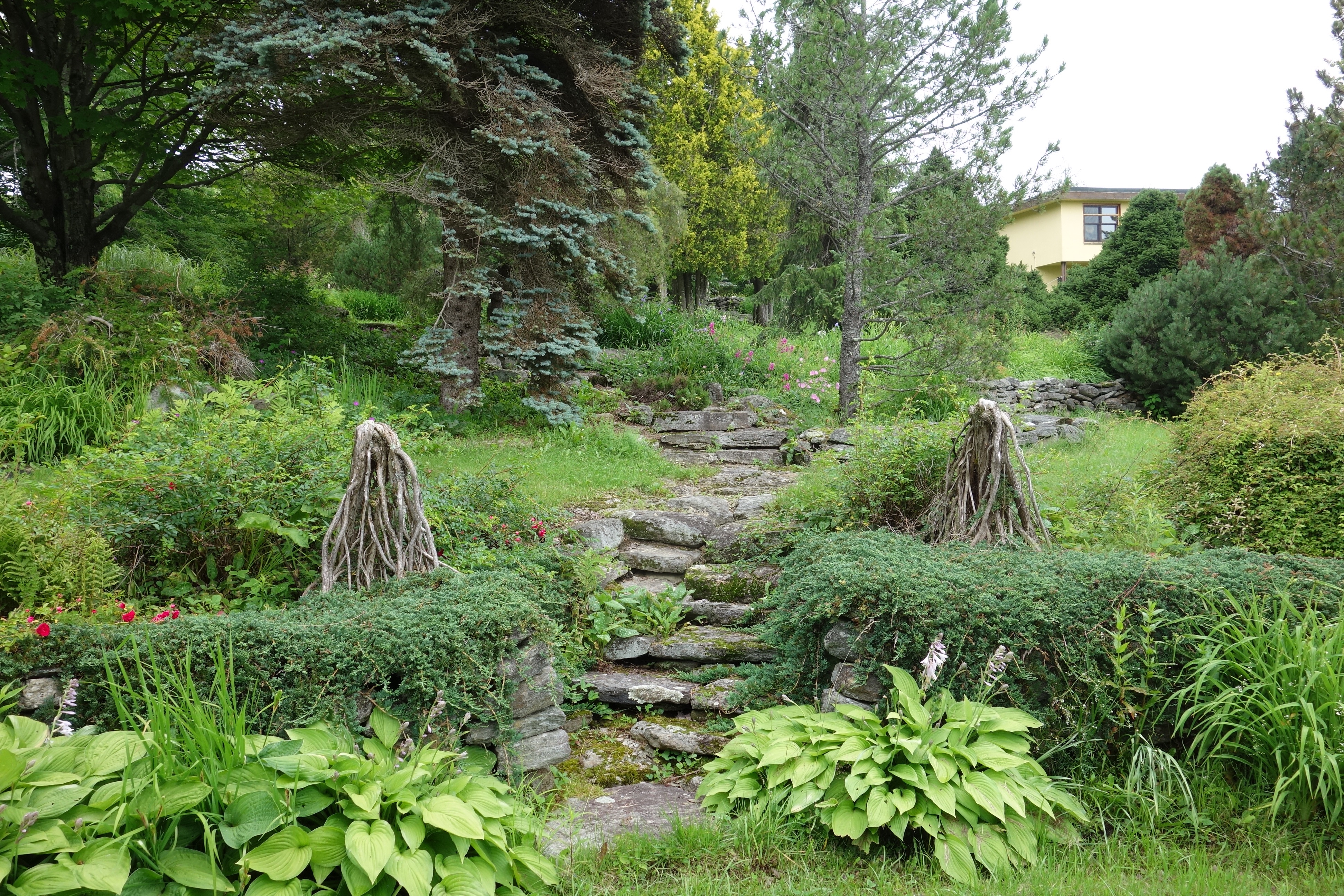 The training grounds in full bloom.

The weeks passed by in a flash. On arriving, rural Vermont was still gearing up for the summer. Shortly then, the trees in the garden and the surrounding woods exploded with foliage. Often at 5 AM, while heading to the zendo to start the day, I looked down over Lamoille county being caressed by clouds in meaningless beauty. Three retreats with three different teachers pushed my practice to new levels. It happened many times that when going to bed after a long day I noticed an unfamiliar feeling of contentment. It was finally enough – I was learning what I needed to, surrounded by people I looked up to and having a great time enjoying the summer. Finally enough. 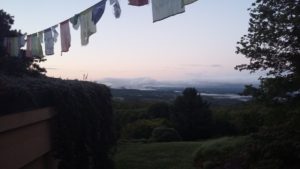 Another commute to the office.

And now? Having arrived here on a short-term visa, I sadly return home, but with a much clearer picture of what’s important. What it looks like to live a healthy, useful life. A rough idea of where my big blind spots hide. These treasures are held together by something I found in the intense meditation practice which is expected at the Monastic Academy. An initial taste of some “thing” which goes beyond experience. Very simple but so unexpected. It made me sense that what the people who teach this path struggle to explain is actually a real thing, something worth striving for. And that all the confusion that comes from not remembering this simple experience is both understandable and tragic.

So rock on, CML. You’ve been both a pleasure and a gift. This is a truly unique organization that has not existed until now. May the gods smile on the crazy experiment that is the Monastic Academy. Something tells me it may just work.