What Is Meditation Anyway?

So what is meditation anyway ? It is a difficult word to throw around because it means so many different things in different contexts. Not only that, but the original meaning of the word is difficult to capture in English – sometimes creating false assumptions about what is being referred to. What will be explained here, is not “the correct understanding” of what meditation is; who can make the claim to have ownership over such a thing? What follows is a simple description how the word meditation has been used in a few traditions.

Lets start with some of the root words that have been translated into meditation;

From a yogic perspective, in Sanskrit, dhyāna, is often translated as meditation, but it is important to distinguish the difference between it and dharana. Dharana refers to a state of initial concentration or concentration with effort. In this initial stage of the practice there is a sense of doing, the mind wanders and it is intentionally brought back. Eventually you reach the stage of dhyāna, where the concentration becomes effortless; it is less of a something you do but more of something that happens to you. Dhyāna will eventually lead to states of complete absorption and merging with the object of focus.  This is called jhāna. As this state is maintained and insight is gained it leads to samadhi.  Samadhi is the goal of the classical yogic path, but the mere beginning of the tantric yogic path. So when meditation is referred to with in a modern context of yoga it usually encompasses dharana,  dhyāna and samadhi, as well as the practices and path that lead you through each stage. 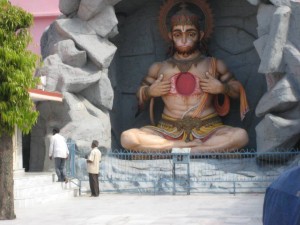 From a Buddhist perspective the sanskrit word for meditation is bhāvanā literately means “to cultivate”. Just as a farmer cultivates a field, one must cultivate the field of the mind – training ourselves to recognize a weed out harmful tendencies toward ourselves and other beings. This represents a developmental approach to meditation that suggests stages of development as the mind is cultivated into a state free from klesha or metal afflictions.

The Tibetan word for meditation, gom, has a slightly different context – literately meaning “to become familiar” – to become familiar yourself with an object of meditation, and with positive states of mind. This represents a discovery approach to meditation that suggests our minds are already free, we just need to discover that which is already there and become more familiar with it. 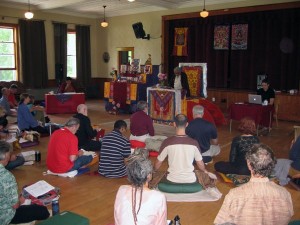 When speaking of the practice of meditation, three categories generally come to mind.

1. Discursive, analytical meditation includes practices that set an ethical foundation and open “the qualities of the heart”.  Examples of these qualities include: the yama and niyamas, the four thoughts that turn the mind, the four immeasurables (loving kindness, compassion, empathetic joy and equanimity), Nurture positive (Basic Mindfulness) etc …

2. Single pointed concentration develops a mind that is stable and clear. It transforms the mind into a functional tool that can be directed at will to its chosen object without distraction and grasping. These practices include: shamtha (calm abiding), dharana,  dhyāna, Selective noting (Basic Mindfulness), etc …

3.  Practices of insight into the nature of reality, or vipassana, use a stable and clear mind to remove ignorance and delusion by seeing through appearances to primordial underlying truth. These practices include; the four applications of mindfulness, Basic Mindfulness, Zen, samadhi etc …

So meditation includes everything discussed here so far – both the developmental and the discovery models; the intentional cultivation of a pure mind and open heart; the stabilization of the clarity of mind; and the familiarization of one’s self with the truth that liberates us from suffering.

As the Buddha said “Commit not a single unwholesome action, Cultivate a wealth of virtue, To tame this mind of ours, This is the teaching of all the Awakened ones.”